Lights are the most used devices everywhere in the world. We cannot imagine our lives without lights. We cannot see anything at night without lights. Light is the most essential and basic necessity in our lives. As  We use lights everywhere, people often get confused about which type of light they should buy. The lights industry is one of the largest industries in the world. The Global market of lighting size was USD 118.33 Billion in 2019. Multiple types of lights are available in the market. Every lamp is made explicitly for a particular task. You must have basic knowledge about which kind of light fulfills your needs and fits in your budget. This article will help you choose which light is best for you. Here we will guide you about Led, Fluorescent, and Halogen lights to help you make a wise decision:

Many historians claim that 20 scientists invented the light bulb before Edison, but Thomas Alva Edison was the one who invented the first commercial incandescent light bulb. Later On, Elmer Fridrich and Emmet Wiley developed the Halogen Bulbs(in 1955). Both of them were working at General Electric. General Electric patented a commercially usable halogen lamp with iodine gas in it in 1959. Halogen Bulb was a modified form of Incandescent bulb. George Inman was the one who led the team of scientists at GE(General Electric), and this team developed the first practically usable fluorescent light, which was sold first in 1938. In 1962, Nick Holonyak, Jr.( the father of LED lights) invented the first light-emitting diode(LED).LED technology is the latest technology being used in the lights industry.

The Working of LED, Fluorescent and Halogen Lights is explained below:

A Fluorescent light is basically a gas discharge tube in which the electricity is used to excite the mercury vapours. Then the excited mercury atoms produce ultraviolet light, and as a result, the phosphorus in the tube fluoresce (glow/shine brightly). And in this way, Visible light is produced in Fluorescent tubes.

LED Lights; How does the LED work?

Full form of LED is Light Emitting Diodes.  As its name indicates that it contains diodes. An LED light consists of many small diodes which produce light when the electric current is applied. LED lights work on the principle of electroluminescence. This means that the diode produces light when the current passes through it. The electrons move from an electron full side to the side where there is a deficiency of electrons across the p-n junction. LED lights are very energy efficient and a bit expensive. LED lights are twice efficient as fluorescent lights. The LEDs do not require a warm-up at the start and can provide the maximum brightness in just seconds of turning it on.

A Halogen Light is a modified form of incandescent light. As its name shows, Halogen lights are the lights that use halogens to produce light. Halogens are the chemical elements from Group 17 in the periodic table. We know about the Incandescent lights(invented by Thomas Alva Edison). There’s the problem in the Incandescent light: when the tungsten filament glows, it starts evaporating and depositing on the inner wall of the glass of the incandescent bulb. After some time, the tungsten filament becomes weak, and at the end, it eventually breaks(fuses). Halogen lights solved this problem by using a small amount of halogens. Tungsten filament is also present in Halogen Lights.

While Buying lights, we check their efficiency, durability, life span, recyclability, brightness, and many other factors. Here we are going to discuss LED, Halogen, and fluorescent lights and compare them:

LED VS Fluorescent VS Halogen lights Brightness and Luminous Flux:

LED VS Fluorescent Lights VS Halogen Lights in terms of Health & Life Span:

LED VS Fluorescent VS Halogen Lights in terms of Cost Savings:

Recyclability is another crucial factor to consider, as the world is full of E-Waste. We should consider using Recyclable products in our lives. If the light is recyclable, we can re-use it and its parts, which helps stop the overwhelming E-Waste. All the components used in LED lights, such as plastic, aluminum, metals, diodes, etc are entirely recyclable. On the other hand, Fluorescent lights are not adequately recyclable. We cannot recycle Halogen Light bulbs easily along with the regular glass, as the wires in the Halogen bulb aren’t easy to separate. So In terms of Recyclability, LED lights take the lead.

On the Other hand, LED lights are Eco friendly and have no toxic chemicals/gases in them. So we should use LED lights instead of fluorescent lights having poisonous mercury in them. The Halogen Light bulbs contain halogens that degrade air quality when released in the open air and are harmful to the environment. Most people prefer LED lights as they are Eco friendly.

Heat is another important factor to think about while choosing lights. Many lights are available in the market that release a large amount of heat, creating many problems. LED lights don’t become very hot and produce less heat, as no heating process occurs in LED lights to produce light. On the other hand, fluorescent lights waste 30% of their energy as heat. And they increase the overall temperature of the area where we install them. Halogen Light bulbs produce a lot of heat (even more than Fluorescent Light Bulb). They also increase the temperature of the area in which we install them. Halogen Lights emit most of the energy in the form of heat. The Halogen lights are scorching because they require a boiling temperature to make light; touching the Halogen lights can cause a burn. LED lights are better in this case as they produce less heat.

The coverage of LED lights is not much as compared to the Fluorescent lights. LED light emits light at an angle of 180°, so less area is adequately illuminated. We use LED lights at the places where we need recessed lighting. On the other hand, conventional light technology(used in Fluorescent Light bulbs and Halogen Light bulbs) lights up the area at an angle of 360°.In this case, we need to buy deflectors to deflect the light in the desired location and direction. In the case of conventional light technology, light energy is wasted illuminating the areas where light is not required if we don’t buy deflectors to deflect the light.

A Light should be durable to withstand bad weather conditions such as sand storms etc. LED lights are more durable than fluorescent lights. Fluorescent lights consist of fragile glass, which can easily be broken, and LED lights consist of parts made of plastic and aluminum that don’t break easily. The LED light will not hurt you even if you break it mistakenly. You can still use LED lights even if you only break its plastic, covering the internal diodes. LEDs are also shock-resistant, and they also don’t have brittle filaments. Halogen Light bulbs also have fragile glass, which can get damaged easily. A halogen light bulb doesn’t work after its glass gets broken. So LED lights are the most physically durable type of Lights available in the market.

The disposal of electronic devices is a big issue. We can dispose of LED lights easily by throwing them into the trash bin, as they don’t contain harmful chemicals/gas. We can dispose of LED lights by throwing them directly into the household garbage. But it is better to give them to a recycling company to recycle them. This will help us to tackle the increasing rate of E-Waste.

Many times we choose the wrong lights for use in extreme weather conditions and face multiple problems. When you’re buying lights for an area where the value of temperature remains negative throughout the year, you should consider whether they work in such weather conditions or not.  Fluorescent lights don’t work in freezing weather, as gases are involved in them. So we can’t use fluorescent lights in icy areas. On the other hand, LED lights work even more efficiently in extreme cold weather conditions. The LED lights can work under extreme conditions like freezing temperatures without any problem.  We can also use halogen lights even in extreme cold weather conditions. If ice builds up on a halogen bulb, it melts rapidly. Halogen Bulbs can perform well in icy areas. So if you want to buy lights for snowy regions, then you should go for LED as they work well in cold areas and are energy efficient.

UV(Ultra-Violet) rays are harmful to all of us. Even a little exposure to UV rays can cause skin diseases. Fluorescent lights produce harmful UV(Ultraviolet) radiations that can be dangerous for sensitive people. Halogen bulbs also release UV rays that are harmful. LED lights emit a minimal negligible amount of UV rays. So if you want to be safe from UV rays, then you should consider buying LED lights.

We live in the 21st century, and all the latest appliances and devices have built-in innovative features in them. There was a time when we used to go to the switch to turn off the lights. But now the latest lights have built-in smart features which enable us to control our lights with our smartphones. We are able to change the color of the lights through our phones. We can also control the brightness of lights. LED is the most used technology these days and Only LED lights provide smart features. There are no fluorescent and halogen lights that offer smart features. 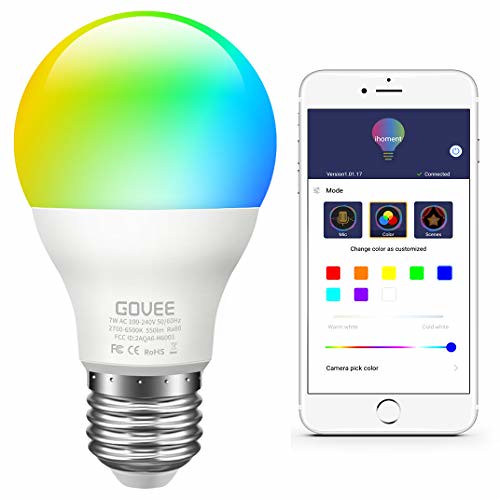 We use lights at every place. Sometimes we require lights in specific sizes and forms. For example, if we want a light strip of 1-2mm, we don’t have such light strips in every light technology. Only LED light strips are available in the market with a thickness of 1-2mm. Fluorescent lights are not available in every shape and size due to their complex design. Small sizes of Halogen lights are also available in the market. The small size of halogen lamps allows them to use in small optical systems etc. People use Halogen lights in automobile headlights, many types of stage lightings, party lights, etc. They are also the heating elements in the Halogen Ovens and Ceramic cooktops.

The LED lights are taking over the Fluorescent lights because the LED tubes are less harmful, efficient, and brighter. LED lamps are ideal for solar power systems because of their low energy consumption and better performance.  In A Customer Survey Conducted by Statista in May 2017 in the US, most residents aged 18-29 years preferred LED bulbs. This shows that the educated youth of the USA prefer LED Lights over all other kinds of lights/bulbs as they are more efficient, durable, recyclable, etc. Due to the Exciting features of LED lights, most people prefer them. . The use of LEDs is spreading on a large scale. People use LED lights in Houses, offices, commercial and industrial lightings.

LED lights have many exciting features that others don’t have. We can get full brightness from the LEDs without any delay. LED lights are more efficient than any other type of light. LED lights produce less heat and don’t increase the temperature of the area. In simple words,  LED lights are far better than fluorescent and halogen lights.

Question: Are LED lights bad for your eyes?

Answer: We cannot say anything about which bugs LED light attracts, as different types of bugs get attracted to a different kind of wavelength of light.

Question: Why do my LED lights flicker?

Answer: In most cases, LED lights don’t catch on fire easily, as they produce light at a very low temperature producing less heat.

Answer: LED lights produce optimized light with less heat emission, so We can use LED lights to grow plants at home.

Answer: Yes, LED lights are far better than Fluorescent lights due to their high efficiency, low power consumption, and many other features discussed in this article.